About the Author David Carpenter is the author of “Your Neighbors Are Doing Psychedelics” and is a writer at Forbes, Lucid News and Benzinga.

Kendra Broward recalls vividly how she was utterly captivated by a carved wooden bowl in her hands during a session of psychedelic therapy. She was in awe of it, inspecting the tiny lines and shapes intersecting at odd angles. “I felt like I was flying over a city and mesmerized by all these little roads and buildings below,” she says about the evening she recently had her first-ever dose of psilocybin-containing mushrooms. “I lost track of it even being a bowl. At one point it became a roadmap of my entire life.”

A few weeks prior to that night, Broward had gone on a search for magic mushrooms and a guide to sit with her during the psychedelic therapy experience. She had no familiarity with mushrooms, she shares, but for many months prior to that had seen an increasing number of articles in her newsfeed about people using psilocybin as a therapeutic aid for emotional healing. She was definitely interested.

The 58-year-old working professional and mother of three relates how she had seen a segment on a Fox News about the efficacy of psilocybin treatments for depression and end-of-life fears. What caught her attention most was the researcher interviewed during the segment was a scientist at the Johns Hopkins Center for Psychedelic & Consciousness Research. She also recalled with surprise how conservative-leaning talk show host Dan Bongino could hardly contain his enthusiasm over the ongoing research on psilocybin to treat depression.

“Doctor, I haven’t been as excited about a topic for a long time,” said Bongino to Hopkins scientist Matthew Johnson, PhD, sharing that depression ran in his own family and agreed that the illness created a “black cloud” for many people.

Broward’s plan to use magic mushrooms had been something she was considering for many months. She had her own black cloud to contend with, she says. But that surprising interview, as well as her months of research and a series of drug decriminalization laws changing all over the United States, reinforced the notion that psilocybin could be useful for her.

But where to begin? 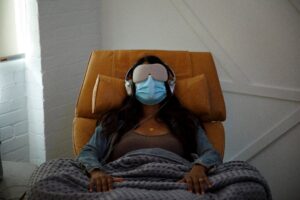 A Skilled Facilitator Is Vital

Allison Feduccia, PhD, is a co-founder of Psychedelic Support, a directory of providers, groups, and accredited education resources for the therapeutic benefits of psychedelics through safe and responsible practices. A neuropharmacologist and psychedelic researcher, Feduccia has worked on studies of psychedelics and mental health conditions for the National Institutes of Health and the Multidisciplinary Association for Psychedelic Studies. She advises, “At minimum, providers must be trained to understand potential medication interactions and medical diagnoses that increase risk for side effects if psychedelics are administered.”

Broward, in her search for a facilitator (also referred to as a guide or provider), knew that finding someone with a medical background would be crucial. The woman she eventually engaged, after several in-depth conversations regarding her methods, impressed her. The facilitator required completion of a pre-qualifying questionnaire that Broward felt was comprehensive and considered her existing medical concerns. The facilitator also made herself available for phone and Zoom calls. “I could see that safety was a priority for her, not just a blind leap into using the drug,” she says. “I also felt it was vital to talk with someone who had experienced the effects of psilocybin firsthand.”

Feduccia agrees, saying that some degree of direct experience with altered states is an important characteristic for a potential facilitator. “Personally, I see tremendous value in the provider having had their own psychedelic experiences or other experiences of non-ordinary states of consciousness, such as Holotropic Breathwork,” she says. “After all, you wouldn’t trust a guide to take you to the top of Mount Everest if they hadn’t already gone there themselves.”

It’s a point well taken, and one that Broward says she had certainly required of her facilitator. “I wanted to know roughly what to expect from the experience,” she says. “Besides wanting to know proper dosing of magic mushrooms, where they were sourced from, and all that, I wanted to know that the guide knew the psychedelic terrain and could help me if I got stuck or panicked along the way —  which she definitely did.”

Broward’s experience with psychedelic therapy was challenging but mostly positive —  thanks to her guide. But not all psychedelic therapies are created equal. Some practitioners take considerably less care in preparing people for an experience. And that lack of preparation can very easily open the door to damaging outcomes.

Last year, the dangerous practice of “speed-toading” hit the Mexican tourist town of Tulum by force. Incidents of tourists smoking toad toxin with no preparation created potentially harmful situations for unsuspecting individuals. Containing the powerful entheogen 5-MeO-DMT — found in the defense secretions of the Sonoran Desert toad, also known as Bufo alvarius — the substance is widely believed to be the most potent psychoactive drug on the planet. “We didn’t even know we were going to do it,” said one woman interviewed. “We just stumbled across this place and saw other people doing it. We didn’t know what Bufo was.”

That lack of preparation is a red flag, says Feduccia. “People should be aware of how psychedelics affect decision making, increases suggestibility, and induces states of vulnerability,” she says, adding that a “lack of screening and preparation procedures” are factors that should make a person very wary of a potential facilitator.

Because psychedelics can create states of disorientation and confusion, it is paramount to have a high level of trust in a provider, which comes from creating a trusting relationship. “How do [providers] support clients before, during, and after the experience of psychedelic therapy?” asks Feduccia.

In Broward’s case, she felt tremendously supported by her provider. Along with the comprehensive questionnaire and meetings prior to the event, the facilitator also suggested they check in every few days for two weeks following her experience on psilocybin. Referred to as integration, the process of discussing impressions after an experience are often as important as the pre-flight plan and experience themselves.

“I came upon some pretty dark parts of myself,” she says. “I experienced death in the deepest way possible while still remaining alive. There was a lot there for me to ferret out.”

Broward says her guide during psychedelic therapy was a key aspect in helping her incorporate everything she experienced into her life today. “Without her I feel the experience would have been a more difficult thing to cope with,” she says. “Her expertise created a space for me to be calm and to let it all just unfold.”

Psilocybe Cyanescens (the Wavy Cap) is One of the Most Potent Psychedelic Fungi By: Corrina Allen-Kiersons

PAC’s Fight for Access to Psychedelic Medicine By: Corrina Allen-Kiersons

5 Things to Know Before Netflix’s How to Change Your Mind By: Tom Buchanan

A Lawyer Makes a Case for Psychedelic Treatment By: Tom Buchanan