The cordyceps fungus is famous for two reasons.

The first is the fungus’ reputation as a zombifying parasite. One strain of cordyceps in particular, Ophiocordyceps unilateralis, is known for feeding on ants, infecting them with spores and literally eating them from the inside out, before sending chemicals to the insect’s brain that cause it to leave its nest, lock its jaws on a leaf and die. The fungus then adheres the insect to the leaf before bursting through the ant’s body via a number of stalks that release spores into the air in order to begin the parasitic cycle anew.

It’s a grim process that has led to cordyceps fungus getting its moment on the silver screen from National Geographic, the BBC and Netflix, all of whom have broadcast captivating — but deeply skin-crawling — high-def footage of the parasitic mushroom taking over host insects (ants, in all cases).

The second source of the cordyceps’ fame is their potency — and history — as a functional mushroom. The two varieties of cordyceps, Ophiocordyceps sinensis and Ophiocordyceps militaris, most commonly found in adaptogenic products such as capsules, powders and teas, are not the same species as its famous ant-eating cousin — but they are also parasitic: O. sinensis preys mainly on ghost moths, while O. militaris will attack a variety of insects, mainly wasps.

Ophiocordyceps sinensis in particular has been called “the world’s most valuable parasite” — demand for the fungus has spiked so significantly in recent decades that, in Beijing, it is now worth three times its weight in gold. 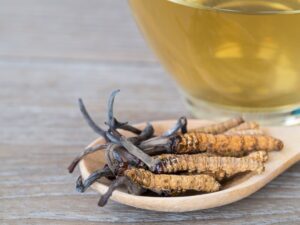 The mushroom is found only on the Tibetan plateau, and its rarity contributes to its high asking price; however, most commercial cordyceps are made from an engineered fungal culture that shares the biological traits of Ophiocordyceps sinensis, but cannot produce the mushroom itself; cultivated Ophiocordyceps militaris is often substituted as a cheaper alternative.

Ophiocordyceps militaris was named by Swedish taxonomist Carl Linnaeus in 1753. Unlike O. sinensis, it is widely distributed throughout the Northern hemisphere.

In the wild, Cordyceps sinensis functions much like its more famous ant-preying counterpart: a ghost moth will consume spores, often from dirt, and its body will eventually become overtaken and killed by the mycelium of the parasitic fungus. The result is long, lumpy and pale orange or dark yellow in colour, with a long, brown stalk; the orange component of the fungus is the ghost moth that has been overrun by the fungus, while the long stalk is the fungus itself. Cordyceps militaris attacks insects in the same way, and grows into a fungus with long, bright orange stalks that protrude from its host insect.

The cordyceps fungus is a potent parasite

The cordyceps’ popularity comes from its long history, and purported efficacy, as an adaptogen: Ophiocordyceps sinensis has been used in traditional Chinese medicine for centuries to treat a number of health conditions. The cordyceps fungus’ potency as a functional mushroom comes from the compound cordycepin, which occurs in both O. sinensis and O. militaris, which is known to have an extremely broad spectrum of biological activity. 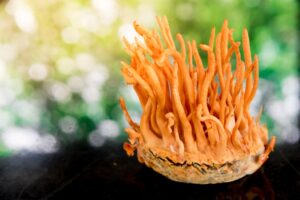 In clinical trials, cordycepin has proven effective at improving kidney, liver and heart function, treating respiratory conditions and sexual dysfunction, improving memory and mood disorders and boosting the immune system. In addition, cordycepin has anti-cancer, anti-inflammatory, anti-microbial and anti-oxidant properties. O. sinensis is strongly associated with an improvement in athletic performance: in 1993, China’s Olympic women’s running team broke three world records at the World Outdoor Track and Field Championships in Germany — a feat their coach chalked up to the use of cordyceps supplements.

Because of its rarity, commercially available preparations of Ophiocordyceps sinensis are most often made from the cultivated mycelium of the fungus, which is known as Cs-4. Cs-4 can be grown on a substrate of grain, which is then dried and pulverized into a powder and sold as-is, or contained within individual capsules.

Like O. sinensis, Ophiocordyceps militaris is most often sold in its cultivated form; however, since this strain of cordyceps fungus can be cultivated to grow fruiting bodies, the mushrooms are sometimes sold whole and can be consumed as a broth or tea or even cooked as part of a meal, in addition to being sold in their dried form. 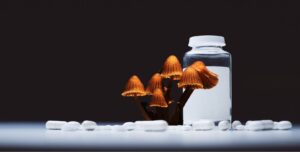 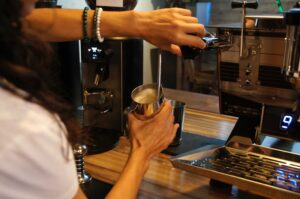